"If I were your age, I would have done the same ALIYAH"

My Poppa – Jack A Continuing Story 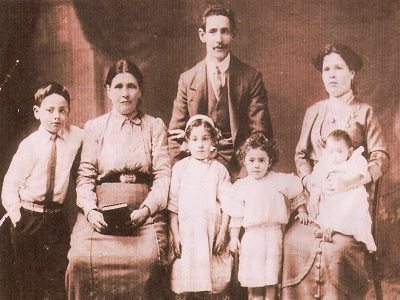 Family BackgroundSimilar to the background of most English Jews

Maurice) and Rachel (nee Shulman) fled from the persecution and povertyrampant in the Pale of Settlement at the turn of the 19th and 20th centuries. They arrived almost penniless in the East End of London sometime in 1905. Their siblings managed to getto America whilst the rest of the family stayed behind andare thought to have perished in the holocaust. Jack recalls that in his early years, his parents still correspondedwith relatives still living in the "heim”. The "heim” being a smallshtetl , which, according to family tradition was called Shevu; but no-one is sure on this point and the family has no record ofits existence. All that is known is that Shevu was situated inMoghilev Gebenya(District) and the nearest town was Smolensk.What they left behind was a behama(beast=cow) and lots of bad memories.In the "haim” Avraham(Maurice) was known as Avraham the Boyer(builder).In England he utilized these skills as a cabinet maker. He was a soft and gentle man.Jack’s parents never spoke English, speaking only Yiddish till their dying day.Rachel could neither read nor write. Jack’s son and my Grandpa, Gary, remembers her as a very dour and sad lady, small in stature and distant innature. Jack, of course, spoke to his parents in Yiddish. Gary was never ableto converse with her. For his generation Yiddish had already ceased to be a means of communication.Maurice died in 1948Rachel died in 1964Apart from the small snippets of information referred to above nothing moreis known of Jack’s parents’ background. Whenever they were asked they refused to speak. It was a closed book of bitter experience.Their life in England as seen through the eyes of Jack as a boy proved to be a major factor in the formation of his character.Jack and his family were very poor… When jack was 10 he got sick, his family didn’t have a lot of money to spend so he could get well. Isolation Hospital In 1930 and at the age of 10 and at the height of the economic depression which followed the "Great Crash” of 1929, Jack was diagnosed as a diphtheria carrier. The consequences in those days was dramatic. He was confined for a year in an isolation hospital separated from all normal life. A time of no school, no friends and no family life. In 1934 at the age of 14, Jack, a brilliant student, was withdrawn from school. Extremely upset at having to give up his education he had to help in supporting his poverty stricken family. Entering the school of life, Jack went out to work. Helping at his father’s furniture business ,young Jack remembers the bailiffs taking away all the stock.  His father, not being able to read or write English or handle the situation sat down and cried.  This made a lasting impression in the formation of Jack’s character.  He resolves to do all in his power never to get into such a situation On several occasions Jack recalls that his brother, who worked with his father, ran off to America. Father in desperation, called on Jack. Giving up whatever he was doing at the time he helped his father. Introduced to Betty, they hit it off immediately. In 1943 they were married. It was the Second World War and Jack, rejected by the army on health grounds, served in the home guard.  In the "blitz” Jack, Betty, and family were evacuated to Bournemouth, a coastal seaside resort. Betty’s father, Paul lent Jack all his savings for a new business, a gesture that Jack would never forget.  Finding a run- down newspaper and confectionery shop in Sea Road, Jack saw potential and bought it, unaware that he was leaving poverty behind forever. Inexperienced, Jack and Betty worked all hours of the day, building up the largest newspaper business in the region. The first with ice cream, at a time of rationing , it was sold in newspaper. Customers lined up outside the shop and Jack was covered from head to foot in it!  The business was so prosperous , within 18 months he repaid his father-in-law and bought the property.  Building a Family: 1945 Gary was born, 1947 Carol born.

1975: Jack visiting his family in Israel and said: "If I were your age, I would have done the same”. In 1980, after a successful career, he retired from big business and from then and until now, at the grand age of 91, he is sought out by family, friends and strangers for advice in resolving their financial problems. Advice he gladly gives. Grandpa Gary: "A wonderful opportunity to work with my lovely grand daughter and pass on the story of our family history together. An experience I will never forget.

”If I were your age, I would have done the same ALIYAH“