"The Navy cooks baked 2-inch thick matzah for him" 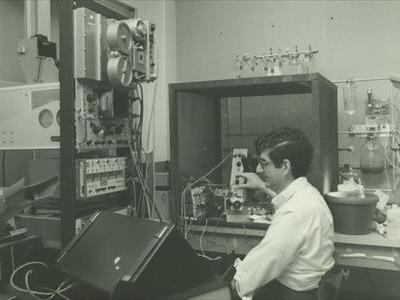 The interview discusses two experiences that US Navy doctor Robert A. Davidoff had during his two years of service in the early 1960’s.

The navy was racially segregated when Dr. Davidoff did his military service. The only people of color on board his ship were the African-American cooks and the Filipino mess boys. Unaware that he was trying not to gain weight while at sea, the cooks and mess boys noticed that he was not eating any of his bread.

Somehow they knew he was Jewish and that there were Jewish holidays during the September period when they were at sea. They grew concerned that he wasn’t eating enough because he couldn’t eat the bread for religious reasons. Perhaps it was compassion from two minority groups for a member of another—or perhaps it was simple kindness—but they baked 2”-thick matzah for him – in September! They read about matzah in the navy cookbook and baked matzah. He was very moved by their act and concern. He thanked them the best he could and he understood that they loved the matzah, and ate it for the rest of the voyage.

Service in the US Navy led to Career in Medical Research

When he was drafted into the United States Navy, Dr. Davidoff was in the middle of a neurology residency, planning to become a clinical neurologist. He intended to open a medical office and take care of patients for the rest of his career. After his month as a ship’s doctor, the Navy transferred him to a research unit where he learned to do research. This changed the focus of his life. He became an academic physician, spending his entire career at University Medical schools, running research laboratories and teaching medical students, interns, and residents.

Assistant Professor of Neurology Robert A. Davidoff doing neurophysiological research in his lab at the Indiana University School of Medicine not long after he was discharged from the US Navy. (photo: c. 1962)

Interview with Dr. Robert Alan Davidoff
Dr. Robert Davidoff's story was documented by his daughter Sarah Beth Davidoff as part of the G2G: Generation to Generation program at Temple Beth Am, Pincrest, Florida. Sara is a graduate of The Culinary Institue of America in Hyde Park, NY. She is the chef/owner of "Fare to Remeber Catering" and the anchor caterer at Temple Beth Am. The program is run in cooperation with the Jewish Genealogical Society of Greater Miami.

”The Navy cooks baked 2-inch thick matzah for him“