"I was expelled for being a Jew"

"I remember my father took us to watch Snow White.. in Italian"

The Escape from Germany

Getting out of Germany after Kristallnacht

The tree in the photo is of Frank's maternal ancestors and it goes back to the end of the 18th century, when his ancestor, a young man in his late twenties, about 28, was killed in a pogrom in Poland in 1797. His young widow with their four year old son ran off to Germany, settled in a town named Conitz and took on Conitzer as their surname.  They might not have had a surname in Poland as most Ashkenazi Jews received or purchased their names around the tail end of the 18th century. This little boy, presumably born in 1793, became the father of about nine children. Frank has a copy of a photo of this man taken around the age of about 70. The family tree consists of about thirty 8” by 17” sheets, drawn in India ink on yellowing paper. It is a monumental work, which also includes copies of family history in Gothic lettering in German along with translations in English.

The Conitzer family became very wealthy in Germany. They owned thirty-six large department stores in Germany, many around Berlin. Frank also has photographs of most of the stores, which were housed in multi-story buildings, owned by the family.

Fast forward to the 1930s… The last family reunion of the Conitzer Family took place in 1933, shortly after Hitler’s rise to power. The photo on the next page shows the elegantly dressed family, about 25 people, in an impressive environment. 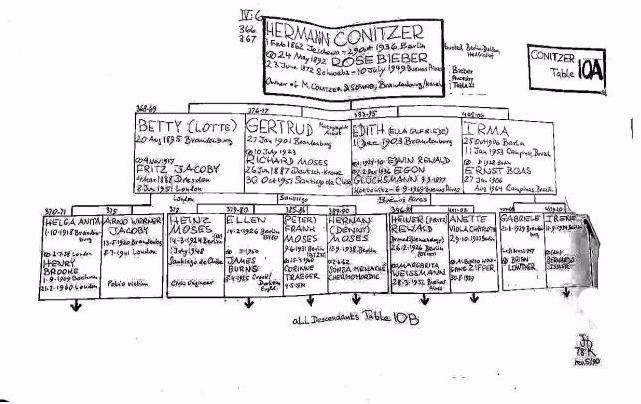 Frank was born in a small town near Berlin on June 6, 1931. He was the third child in the family. Herr Moses managed one of the Conitzer department stores. The family spoke German at home and they were not active participants in Jewish rituals, but Frank remembers her maternal grandmother, Rosa, taking him to a synagogue. Around 1935 the Moses family moved to Berlin from their suburban address and Frank was sent to a public elementary school in the fall of 1937, four years after Hitler came to power and two years past the Nurnberg Laws. He doesn’t remember any problems getting along with the children in school, where there was only one other Jewish child, but he remembers Hitler’s picture hanging in every classroom and the endless praise for Hitler declared by their teacher. Frank was once beaten up on the street and went home all messed up with a bloody nose.

heir relatively normal life came to a halt with Kristallnacht on November 9, 1938. Frank’s father was arrested and dragged to a concentration camp along with thousands of Jewish men. The Nazis broke into their apartment, tore up everything before they left. The next three months were terrifying with no word from his father, but when he was released, they could hardly recognize him. He had lost a lot of weight, had not bathed for three months and had been wearing the same clothes. He smelled terrible. Frank’s mother made a bath for him and nursed him back. Based on the sample sheet from the family tree, Gertrud was pregnant with Denny. Frank made no mention of this during our interview, but had spoken about his brother living in Santiago de Chile.

After his release, Frank’s father received an invitation from a Chilean diplomat to come to his country. They began to take Spanish lessons, liquidated their property and were allowed to leave Germany. The family flew on Lufthansa to Milan and then transferred to the railroad station, the busiest one in Europe at that time. There was a huge crowd at the station and Mr. Moses told the children to hold hands to be safe in the huge crowd. But Frank got separated from the family and drifted away in the crowd, which was waiting for the arrival of Hitler’s entourage visiting Mussolini, who was waiting for them. Little Frank recognized Hitler from the pictures he had seen everywhere in Germany.  When the formalities ended, a policeman found Frank in the crowd and took him back to the station where his parents must have been greatly stressed. The family traveled to Genova, where they booked their passage to South America sometime in 1939. They were fortunate to book their Atlantic crossing to Chile through the Panama Canal on an Italian ship, but accommodations were only available in First Class, which wiped out the family’s savings and they arrived penniless in Santiago, Chile.

Chille and the move to the U.S.

Frank’s father found some work, doing physical labor and his mother became a photographer. Frank started school again in first grade as he did not know Spanish. When he finished public school, he studied the art of engraving at a graphic art school. Frank was about 28 when he immigrated to the USA and settled in Miami working as a photo engraver for the Miami News, a daily newspaper issued in the afternoon. Frank was introduced to Corinne Traeger and they were married on April 15, 1960. They have two grown sons and Aaron is their grandson, an first-grader at the Temple Beth Am Day School in Miami. Due to financial problems and loss of prescriber, The Miami News ceased publication on December 31, 1988. Frank was also employed at the American owned Braniff International in Costumer Relations until that company also ceased operations in 1982. Frank has fond memories of being able to fly with Corinne to Europe at no charge for the flight.

Today, in February, 2019, Frank and Corinne are living in their spacious house–no mortgage–surrounded by hundreds if not thousands of books. Their living room furniture includes several remarkable objects, a full-size shiny black piano played by Frank. He related the story that back in Germany around 1935, Gertrud, his mom, heard someone play the piano. It was Frank, who never had any lessons, taught himself to play classical music by ear. He played some music by Mozart for us and Yoram recorded it on video.

There is also a suit of armor from the Conquistadores that they acquired in Chile and brought to the US. The coffee table is loaded down with huge art books of a great variety. Frank spends a lot of time collecting books about the Shoah and reading those, but it seems to be self-torture. It is very painful, but he goes on reading.

Frank and Corinne were members of Temple Beth Breira in Miami, but that temple’s foundier, Rabbi, Barry Tabachnikoff (z”l) passed away a few years ago. The building has been torn down to make room for a medical office building. Frank’s health is not as good as he would like it to be. He had heart problems, but he goes on with his reading and teaching the young about the Shoah and being a proud grandpa.

”I was expelled for being a Jew“

”I remember my father took us to watch Snow White.. in Italian“